An odd state of affairs

I've got that year zero feeling again. A new album is in the can and I'm at that blissful stage where no one has actually heard the thing yet and no judgements have been made. If any of you have read Paul Auster's "The book of illusions" you'll remember the character who makes movies that no one ever sees. He seals them in a vault only to be seen once by one journalist after his death and thereafter destroyed.

Right now "The Pursuit" is in my car, it's on my iPod, it's on my home stereo and it's my favourite album. After it comes out I will probably never listen to it again unless by accident in a restaurant. It's an odd phenomenon, but I wouldn't change it for the world. 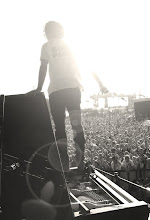